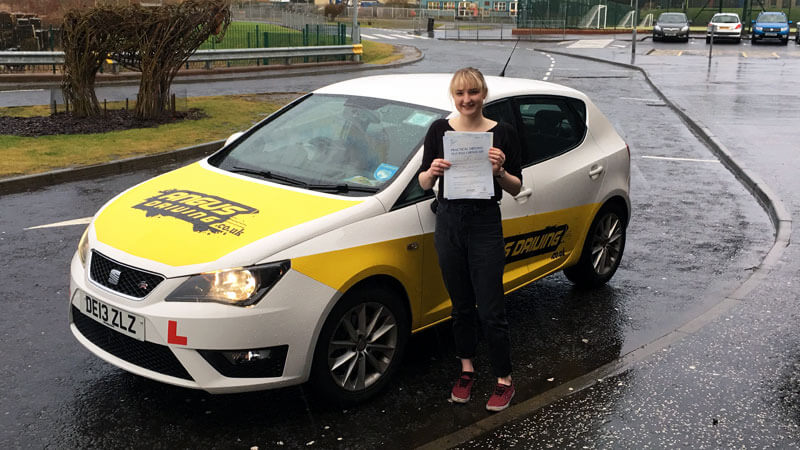 Morna started driving lessons a few months after her seventeenth birthday. She waited until her exams were out the way and she had the summer to concentrate on driving before starting her final year at Biggar High school. Morna was really lucky that her mum and dad had managed to buy a small car for her to practice in between driving lessons and also use once she had passed. The first time we went out driving we headed from Mornas down past Dunsyre which was great as we had mile and miles of road to get used to the car, practice changing gears and lots of corners to perfect our steering on before coming to any junctions. As driving lessons progressed, we started heading up to Penicuik and driving around the estates there getting used to a bit more traffic around us and some small roundabouts which Morna hated. Going to school in Biggar all of Morna’s classmates were learning and taking their driving tests in Lanark, which when compared to something like Edinburgh doesn’t have anywhere near the features and complex road systems that we were looking at. Morna told me that some of her friends were saying that roundabouts were very straight forward, we discussed that the advantage to learning in Edinburgh and that her friend had probably never even driven on a roundabout with more than one lane going around it. The summer came and went but by this time Morna was starting to get a grasp of everything. We regularly ventured up to Edinburgh to practice as well as going across to Dalkeith and looking at things like Sherifhall roundabout. So that Morna could report back to her friends what a real roundabout looked like. As November approached, Morna was starting to really get the hang of roundabouts, so we looked at booking a test in Edinburgh at the Currie test centre. Morna managed to get a date organised for the 9th of January. After a short Christmas break, we resumed driving lessons fitting in one final practice the week before Morna’s test. The practice went really well and the outings that Morna had driven on with her mum and dad over the Christmas holidays was noticeable. On our way home from this lesson we witnessed a motorcyclist getting knocked off his bike by a car which was very eventful. Fortunately, the rider was not seriously hurt. Morna dealt with the situation really well though as it all happened suddenly in front of us. Finally, test day was here, and it was time to go for it. We headed into Edinburgh first thing in the morning leaving Mornas at 0640am it was a really horrible dark and rainy morning. Not really what you want on the day of your driving test. On the drive into Edinburgh, we went over the show me tell me questions one last time. Once we arrived in Edinburgh Morna managed all three manoeuvres perfectly. We did one last drive up Calder road with all the roundabouts which went to plan before parking up for the test. I had told Morna that she was my first test of 2017 so would like to get this year away to a good start. Haha. Morna managed to pass first time with only two driving faults which was brilliant I was delighted for her. Well done enjoy your freedom.