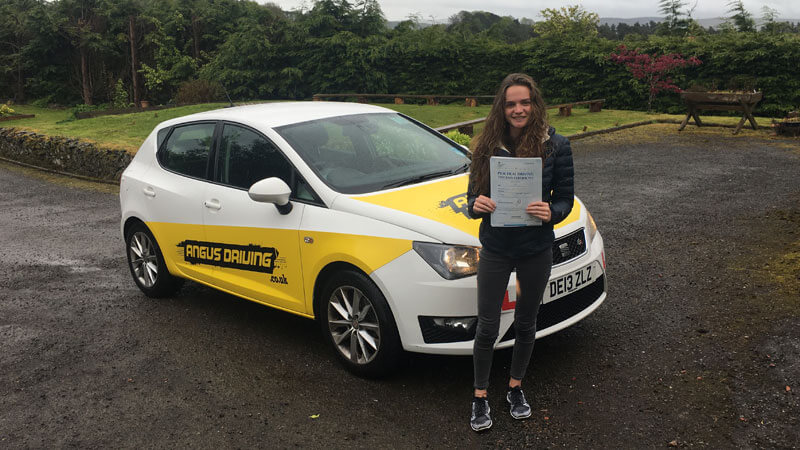 Luiseach began driving lessons in August last year I had been teaching her older brother Calum to drive but he had moved through to Glasgow before sitting his test. The race was now on to see if Luiseach could learn and pass before Calum returned from Glasgow. We started our first lesson driving down to Penicuik from West Linton going over basic car control and then having a go at some junctions which Luiseach managed to get the hang of. As lessons went on we just kept adding to the challenge driving in a range of places. Roundabouts seemed to be what Luiseach found the hardest thing to master and she isn’t alone with this as most people find roundabouts difficult when learning. I think it is the fact that you have to think on the move a bit when you arrive. We regularly went through a selection of roundabouts that Edinburgh had to offer before searching for some more. We headed up towards Dalkeith and Bonnyrigg as there are lots of roundabouts linking the roads together up there. After a few sessions of going through very complex road systems and myself constantly quizzing Luiseach about which lane she was going to take and will she signal? Luiseach started to make noticeable progress. We now needed to get the theory test done so Luiseach could have a go at the practical test. Luiseach managed to sit and pass her theory test in March just before her exams were going to start so then arranged to sit her driving test one week after her last exam. This would make May a month of tests for Luiseach but the outcome would be fantastic. In the final few weeks, Luiseach worked hard practising with her Mum and doing a few last driving lessons to fine tune some skills. On the day of the driving test after having weeks of warm sunny weather, it decided to rain pretty hard which would add to the pressure of the day. We discussed how the rain would affect things such as visibility and following distances. I was really happy after standing waiting in the rain for Luiseach to return to the driving test centre. I was told that she had passed on her first attempt. What a great way the end her exam season and probably the huge motivation for her brother Calum to bring everything together and sit his test too.