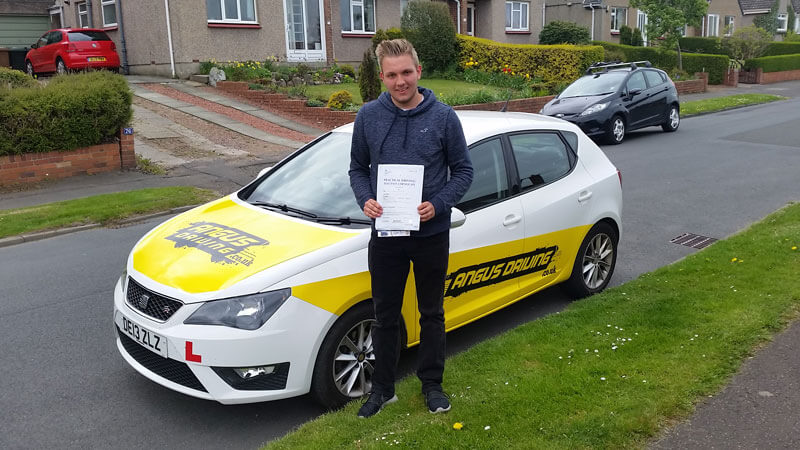 Fraser started driving lessons at the end of last year, he was in his final year at Firhill high school in Edinburgh. Fraser was just recovering from breaking his elbow as we started driving lessons, luckily was over the worst of it and had full use of it again. During our first driving lesson we ran through the basics and drove locally sticking around the Colinton area of Edinburgh. Fraser already had a little experience as he had completed a young drivers course. During this he had been shown the basics of how to start and stop a car. On Fraser’s first driving lesson we took the existing knowledge Fraser already had and built on it. Each week when Fraser and I went out we had a plan and tried to progress as much as we could, along with exploring other areas of Edinburgh on his driving lessons. After a while we had covered everything that was going to be expected from Fraser, we now just needed to get very consistent and make sure Fraser could handle the pressure of the driving test. We did this by carrying out a mock test and then fully discussing any faults and then the next week we focused more on these areas. Fraser was also using the videos on my website which made a noticeable difference to the way he was driving! We managed to get a test booked for Fraser, it fell just a few weeks after he finished school. Fraser told me that the driving was the most important exam he had this year. On the lead up to Fraser’s test his mum had changed cars to a smaller one so that Fraser could be insured on it. This made a huge difference as between lessons Fraser was practicing and all aspects of driving were becoming more and more natural. When test day came we were ready, I collected Fraser bright and early which was probably a good thing as it meant he didn’t spend the whole day worrying about his test. Fraser was the first test to arrive back at the Currie test centre, but he brought really good news as he had passed and was told that there was no reason to be nervous by the examiner as he had driven incredibly well. I was delighted.