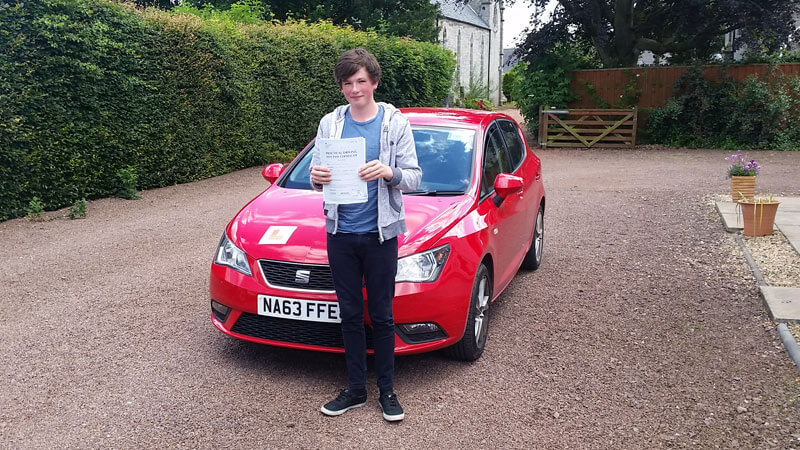 Lewis’ mum got in touch to arrange driving lessons for Lewis to begin during his easter holidays this year. Lewis had never driven on the road before but was a complete natural. During our first two hour lesson we started in the main housing estate in Roslin and quickly ran through everything contol wise. We then started with some junctions which after a few laps around Roslin Lewis seemed pretty comfortable with and I could see he really understood what he was doing. We then had a talk about roundabouts and did a lap just outside Roslin which Lewis seemed to take in his stride! I was so impressed as he is one of the fastest learners I have had for a while. At the end of the first driving lesson we had covered junctions turning left and right, in and out. Roundabouts turning all directions we had also had a brief look at the Edinburgh city bypass and some country roads! So when our second driving lesson came around we didn’t have much more to learn apart from maneuvers and practicing the driving we had already covered. Lewis had a very busy schedule at school and had limited availability until exam leave so we after a few lessons we needed to put driving on hold for a few weeks. The next time I saw Lewis was during his exam leave, he had also had the chance to go out practicing with his dad in an Arnold Clark dual control which had really brought things together. Now all we needed was for Lewis to sit his theory test and then we were good to go. Lewis sat his theory test and passed just before I went on holiday. This was great we were now on the final push towards his driving test. Lewis managed to find a cancellation for the start of July which was great as he was also now on school holidays. We did a driving lesson a few days before Lewis’ test and everything went to plan so I was extremely confident. When the driving test came around Lewis managed to perform just as well as he had been practicing passing first time with only one fault. A great result!