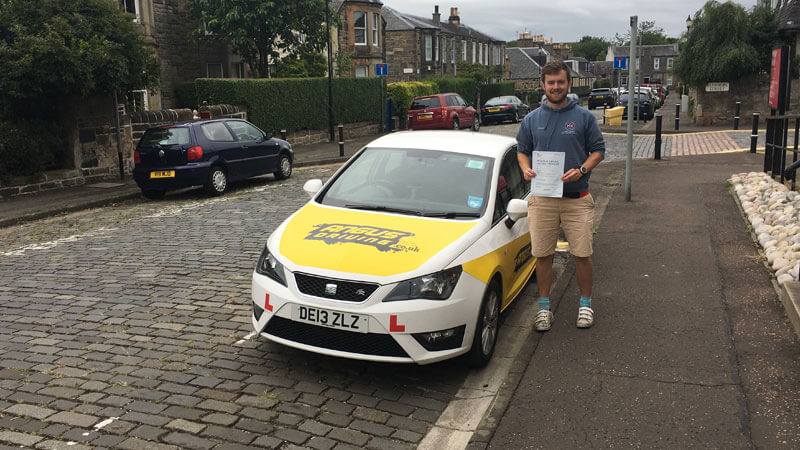 Andrew started driving lessons at the beginning of summer this year. I had had the pleasure of teaching Andrew’s sister Rona to drive last year and she had done really well passing in Edinburgh so it was hopefully time for Andrew to follow in her footsteps. Having never driven a car before we started in a very quiet housing estate in Edinburgh running through the basics. Andrew was a quick and relaxed learner never panicking if he made a mistake. This helped a lot as he could remain focused even when things were difficult at the beginning of learning. After only a few times of going out, Andrew managed to cover all the areas of driving at a basic level this juts meant we needed to practise and become consistent. We worked hard during lessons really looking to improve any weak areas we could find and once we were happy tried a mock driving test. Andrew actually did really well during his mock driving test so we decided to line up a real driving test as soon as possible just. Andrew managed to book a driving test at the start of July which was very exciting as it was close enough that the date would be here really soon but far enough away we could carry out final preparations. I collected Andrew on my day off a Sunday morning, this was the only thing I was going to be doing driving wise this day. Luckily Andrew made it all worth while passing his driving test on his first attempt with only three driving faults. Well done.