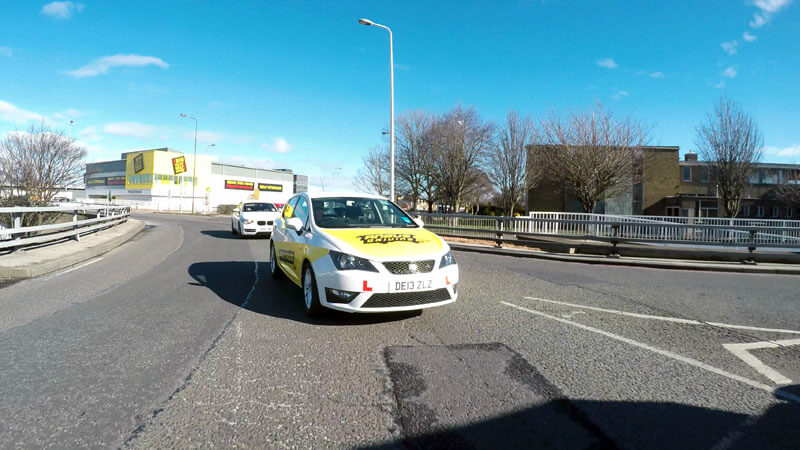 Having been a driving instructor for the last six years, I have been to a range of driving test areas in the areas surrounding where I live. These would consist of Edinburgh both the Musselburgh and Currie test centres, Peebles and Lanark. Of course, every test centre will have its little challenges and tricky bits of road in the surrounding areas, but I feel that the difference between learning to drive in Edinburgh compared to these quieter towns is extremely noticeable. Living in Carlops which is just fifteen minutes away from the edge of Edinburgh a lot of the people that I get to go out with are from West Linton. We have a few have the choice of two test areas from West Linton these would be Peebles or Edinburgh at the Currie test centre. I try to persuade as many of them as possible to pick Edinburgh even though Peebles has noticeably higher pass rate for the driving test. I feel that the experience and knowledge that you will acquire learning to drive in Edinburgh is worth every extra bit of time learning.

When I was seventeen, I was really interested in learning to drive and couldn’t wait to begin. I learnt to drive in Edinburgh, and at the time the driving test centre was at Sighthill in Edinburgh. This pretty much guaranteed that I was going to go through the roundabouts on Calder Road, the same ones that are still used today on the Currie test route of Edinburgh. I had to master these before there was any point of me sitting a test. I remember finding them challenging and trying to work out when to go and read what other people were going to do. Slowly it all started to make sense. After passing my test, I was out in my car constantly. I was exploring parts of Edinburgh with friends and driving to a range of events and venues where a lot of the time I would be driving on roads that I had never driven on before. I was taking on roundabouts that while taking driving lessons in Edinburgh I had never been near. I don’t ever remember feeling phased though! I had a plan and stuck to it, of course, sometimes I might end up going the wrong way or getting lost, but I don’t remember panicking or feeling stressed out.

Someone I was teaching to drive earlier this year, who was doing very well with the driving. We at the stage of just practising things and getting a bit more consistency during driving lessons, before booking a driving test was telling me a story. They were telling me that one of their friends had passed their driving test in Peebles with no driving faults, this is full marks which is an incredible achievement! The next week this person gave them a lift up into Edinburgh from Peebles, everything was going well through Peebles as the departed to head for Edinburgh. As they got towards the outskirts of Edinburgh, they had a few roundabouts that they had to go straight on at. The person I was teaching to drive said they noticed that the individual from Peebles positioning was wandering a little bit, they said he didn’t comment as I’m sure it wouldn’t go down to well. As they got closer to Edinburgh they had to drive through Gowkley Moss Roundabout which is just outside Penicuik, this roundabout is a spiral roundabout which they don’t have in Peebles. According to the person I was teaching to drive the person from Peebles froze as they were just about to enter the roundabout saying “I don’t know what to do here”. Luckily the person I was teaching to drive had been though many spiral roundabouts when learning to drive in Edinburgh and talked their friend through it. Now it isn’t the person from Peebles’ fault, as when you look at the road setup in the area they have learnt to drive in you can only turn left or right at a roundabout. They have obviously managed to take in and demonstrated to an examiner that they could drive well, but the level is nothing compared to learning to drive in Edinburgh

In the clip featured above is the exact thing. Someone lacking the experience of learning to drive in Edinburgh, or a city environment might do. If you watch the featured car, it starts in the middle lane, then changes to the left before returning to the middle lane. Then the most dangerous bit it turns right from the left lane crossing the path of a red car.